The Joan Broerman Book Basket was named in honor of one of the founding members and long time Regional Advisor. Joan was moved to start the book basket tradition by a keynote speech by Harold Underdown in which exhorted the attendees to support library funding. The Book Basket was first announced in the summer issue of Southern Breeze in 1997, and was awarded for the first time at the fall 1997 conference held at South Shades Crest Elementary School. It has been awarded at every conference since then, twice each year, a total of 28 times. 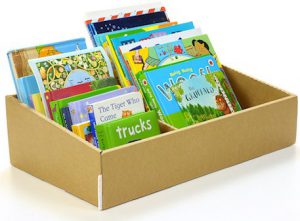 At each conference, organizers place large baskets on a table, and attendees purchase brand new books from the bookstore for the basket. If the authors and illustrators of these books are attending, the library receives signed copies. At the end of the conference a raffle determines which attendee will get to claim the books and then donate them to a local library.

The first basket was won by Wanda Langley, a member of the 4 at 5 critique group in Athens, Georgia, who gave it to the Athens-Clarke County Library. She presented an accompanying check to the children’s librarian (and fellow SCBWI member) Jackie Elsner, who purchased books by Georgia SCBWI members. Autographed books that were donated that year included books by Faye Gibbons and Jo Kittinger. Speakers often bring books from their publishing houses too.

In February at Springmingle ’11 65 books were collected from attendees. Ashley Parsons won the basket and donated the books to the Opelika Public Library. More than 25 libraries have benefited from this opportunity to share their books and their hearts with the young readers in their region — many in poor rural areas, and many in desperate need of new books. Although the book basket is normally a coveted door prize for one lucky attendee, in 2011 they have been collecting books for two schools which were devastated by the April tornadoes: Smithville k-12 in Smithville, MS, and Alberta Elementary School in Tuscaloosa Alabama. The books in the Joan Broerman Book Basket will be added to the books already collected and delivered along with SCBWI grants to the librarians from these schools.